Project Re_ is a partnership between the UDBS, Trade Institute of Pittsburgh (TIP), and Construction Junction (CJ). All three non-profits are leveraging their assets to create opportunities for prosperity by expanding knowledge and skill sets. PROJECT RE_’s mission is to reuse materials and facilitate landfill diversion; rebuild communities by strengthening capacity of local residents; and restore lives by teaching people trade skills to secure a living wage.  The 10,000 SF space at Construction Junction that hosts Project Re_ includes a community room, design studio, gallery and workshops for wood, metal, masonry, and digital fabrication.

Under the direction of John Folan, director of UDBS, the students and the trades worked with a local CBO to design two infill housing units in Pittsburgh’s East Liberty neighborhood. With the departure of Professor Folan to the University of Arkansas in 2019, the project was moved into construction by TAI+LEE, Architects PC, the office of former School of Architecture head Stephen Lee. For the project, UDBS is the design entity, TAI+LEE, Architects PC is the architect of record, East Liberty Development Inc. is the developer and Akator is the builder.

For the façade, UDBS worked with TAKTL to find ways to divert overruns of their UHPC concrete panels from landfills. What emerged was a new product line known as TAKTL NOW: pre-cut, pre-crated UHPC panels with nominal sizes at substantial cost savings over the custom production runs. Re_Con affordable housing will use 1”x6” TAKTL NOW panels mounted on Knight Wall Systems’ PanelRail™. The PanelRail attachment will be fastened to the 16” on center 2×6’s of the exterior wall through the Tyvek covered OSB sheathing.

“Knight’s Panel Rail was specified because it can be used horizontally and still allows drainage down the face of the air barrier,” Lee said. “Also they are available in varying widths to accommodate either mid-panel or top and bottom panel attachment and can be affixed through the air barrier and sheathing directly to the studs without a secondary rail system.”

Products and housing prototypes developed in the space will be used to sustain the center and fund future community outreach projects. Job training will be offered for people looking to learn new skills. Workshops will be offered for the public to design and make do-it-yourself projects. 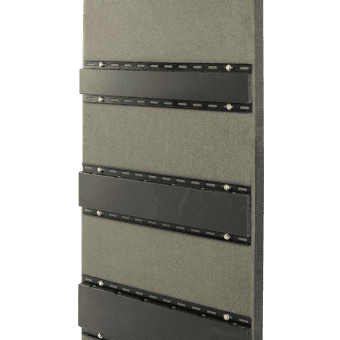 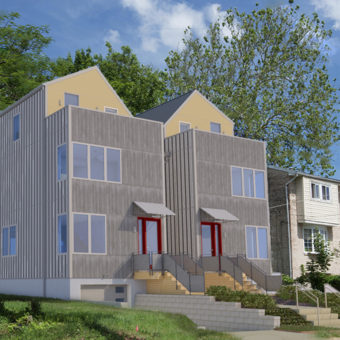