Recently completed in Columbus, Ohio, 250 High, a 12-story, 315,000 square-foot, $51 million office and apartment complex was developed by Daimler Group and Kaufman Development as a dynamic live-work environment in the heart of Ohio’s biggest city. And it’s the first major commercial development project on South High Street in decades.

The Columbus office of NBBJ, the firm that designed the mixed-use building, occupies 22,500 square feet of it and joins other creative services companies in an environment that reflects the changing employment landscape of the area. The project brings to the area not only jobs, but also hundreds of new residents who provide engagement and energy to the district.

Featuring six floors of office/retail and 120 apartments, 250 High Street employs a precast concrete and glass curtainwall, with a modern approach to a downtown building, providing a striking contrast to its more traditional counterparts in the area. 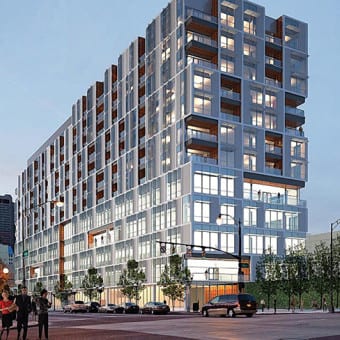