The Uptown Lofts are a unique mixed-income housing project in Pittsburgh’s Uptown neighborhood, which was chosen by the Pennsylvania Housing Finance Agency (PHFA) for its inaugural Innovation in Design Award, recognizing its energy efficiency, commitment to underserved populations, and its role as part of a broader vision for the neighborhood.

The project, whose contruction costs totaled $9.5 million, includes two buildings currently being completed in Uptown this year, which together will provide 47 new apartments: 23 affordable units in one and 24 units for young adults moving out of foster care in the other. Each will be three stories and 30,000 square feet but designed to different energy codes: one designed to the Pennsylvania Housing Finance Agency (PHFA)’s criteria of 10% better than Energy Star; the other will receive Passive House certification (PHIUS+), which mandates it be built airtight with heat recovery ventilation. This is estimated to reduce heating energy consumption by 60 percent per square foot per year.

For both buildings the façade system was critical for energy efficiency. The wall sections of each building are identical with the exception of the continuous insulation depth. The nominal R-values are R-33 (with 2” of polyisocyanurate + batt insulation) and R-40 (with 3″ polyisocyanurate + batt insulation). While the Knight MFI-System is designed for mineral wool insulation, the contractors (Grafton Construction, New Castle, PA) found it easy to cut the Rmax ECOMAXci polyisocyanurate insulation around the MFI-System brackets. They also found the system easy to adjust for specific building conditions and tolerances. Three different size brackets (some S-series and some D-series) were used to accomplish the varying depths of the façade, in addition to some custom rails for areas with a cantilevered fascia… 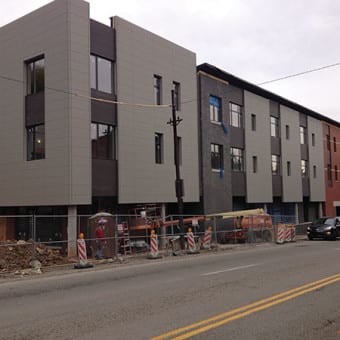 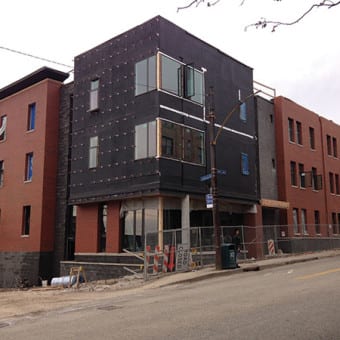 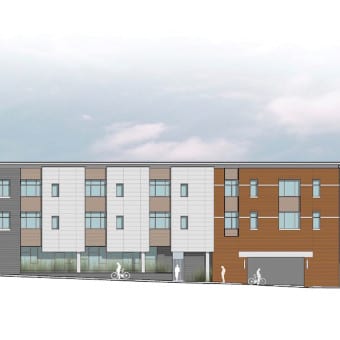